I’ve noticed something interesting during the many (many, many, many) Elmo DVDs I’ve watched with my family. One of the biggest stars in Elmo’s World is a character who never says a thing!

That’s right…much like Silent Bob or Teller of Penn and Teller – but for younger audiences – Dorothy, Elmo’s pet fish, has a huge impact on the direction of the show…even though she never actually says a thing.

It’s clever. It’s a little bit silly. And it works. My 3 year old daughter, upon witnessing goldfish in a pond, immediately jumped up and down, exclaiming so the entire park could hear “Hey, that’s Dorothy! And that one, and that one, they’re ALL DOROTHY!” (Okay, she watches too much tv.) Young watchers love Dorothy almost as much as Elmo. What is it about a simple goldfish that gets kids smiling and up on their feet to join the fun? I believe the phenomena is all about what’s around Dorothy. The presence of Elmo’s fishy friend provides a backdrop for all kinds of learning, imagining and fun. 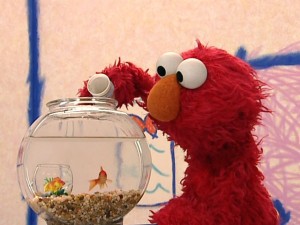 If you’re planning an Elmo party for your little one, be sure to include Dorothy imagery, games and even food. The partygoers will be thrilled to see that Elmo’s best aquatic friend has been included in the fun!

Party decorations really set the stage for the fun to come. I really must recommend the Elmo Ultimate party pack for your child’s party, since it has everything you’ll need for an Elmo theme celebration and will save you tons of time . . . except Dorothy! I searched everywhere, and found nothing. Apparently, party suppliers don’t do kid testing. My child’s preschool just got a fish tank, and everybody unanimously called one of the goldfish … really, take a guess!

But that’s okay. Dorothy is a goldfish. Simply buy any generic goldfish toy, and look for a fish bowl at a garage sale, and you have your Dorothy prop!

Even better, for your cake, I found a place called The Party Works that sells a complete set of cake toppers.

Here’s another easy decor tip to include Dorothy in your Dorothy and Elmo party: Set the table with your Elmo plates and table settings, then place a huge bowl of Goldfish crackers in the center, or a plastic fish bowl filled with birthday party punch (use red juice or red food coloring to follow the Elmo colors).

If you’re holding your party during the summer or if you live in a year-round warm weather area, have lots of water play at your party. This plan will keep kids occupied (and outside!), and it goes perfectly with the Dorothy idea. Elmo has been seen water skiing, snorkeling, swimming and more in his many TV and DVD adventures

, but a rented or bought water slide will do, as will a water play table for very young tots.

Tip: Make sure you note on the invitations that there will be water play so guests will come dressed accordingly. Also specify that each guest should bring two towels in case one gets wet.

are another great activity. Try an Elmo or a fish-shaped pinata and let kids take swings and collect the treats that fall. Give each guest a goody bag and have the children toss the treats in as their party favors.

Above all, keep things simple! This age group (birth through preschool) is interested in yummy food, a good time and excitement…but not too much excitement. Stuffing your party schedule with too many activities may result in tears from overwhelmed guests. Play a game or two, but keep things loose and relaxed.

Have plenty of room for kids to just kick back if that’s what they want to do, or if they need a break from the festivities. Also don’t hesitate to say no if parents ask if they can drop their kids off at the party rather than staying to supervise, particularly if the children are very young. You’ll want to keep things simple for you, too, and as stress free and fun as possible.

Have a great time putting together your child’s Elmo and Dorothy party!