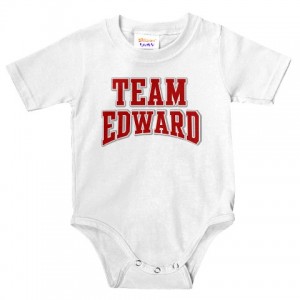 Stranger things than a Twilight Baby Shower have happened.  After all, in the last book, Bella actually has a baby.  Oops, did I give away the ending?  Chances are good that if you’re seriously considering a Twilight baby shower, you’ve already read the books cover to cover, six times. On with the show!

You can focus on the “love” part for a twilight themed baby shower invitation.  Use quotes from the book like “Welcome precious baby.  I love you more than my own life.”  (Yes, that’s creepy, but we’re dealing with vampires, yes?)

You can also mock up a movie poster and say “Coming Soon” with baby’s due date on it.

To stay with the red and black color scheme, serve red and black foods: licorice, strawberries, red soda pop (with labels that resemble blood type:  Type A, Type O, Type B).  You can also serve some of the food from the books like Mushroom Ravioli and anything Italian.

Of course, some nice, juicy red Rome apples wouldn’t be out of place, either.  (They are the closest in shape to the apple on Twilight’s cover.)

Use items from the book covers to help decorate for your Twilight baby shower.  Red and white “parrot tulips” in a vase would make a pretty centerpiece – those are on the cover of New Moon.  (You can find artificial tulips like this much easier than real tulips.)

There are a number of fun games you could play at your Twilight Baby Shower. Here are a couple of ideas.

What to give guests at a vampire-themed baby shower?  Twilight merchandise

, of course! You can try Amazon or, for some creativity, CafePress, which sells a variety of Twilight baby clothing (look up “Get Official Twilight Movie T-Shirts at “Twilight Mom”

” too for some neat ideas.)

Else, a copy of the movie soundtracks would be a nice touch.  So would a little favor bag with some black and red candies.  Anything that carries the theme.  Or, for guests who haven’t read the books, a paperback version of each.