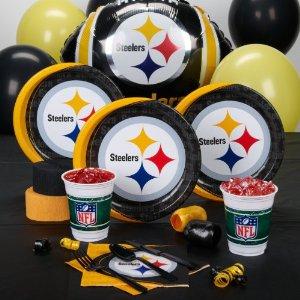 Go Steelers! Do you wave your Terrible Towel for Pittsburgh every fall? Then join the fan club. This super team has gone to the Super Bowl seven times (and taken home six rings) in its illustrious history. They’re going to the Super Bowl this year! So get in gear with a Pittsburgh Steelers party theme this February and cheer them on!

Choose this party theme to celebrate:

When to Hold Your Party

The obvious timing for a football party is between September and the Super Bowl (usually in February). Choose a game night – any evening the Steelers are playing is fine. (If you have a pay sports channel that will show all the Steelers’ games, then you will have plenty of choices.)

Check out the Steelers’ game schedule to find out when they’ll be playing (and who they’ll be up against).

If the Steelers make it to the playoffs (and with a majority of the latest seasons seeing P-burgh there, it’s a distinct possibility), hold the party during a playoff game. The playoffs are a particularly hot time for an NFL party if you’re in a Fantasy Football league and are in the lead – or trying to pull ahead.

Naturally, if you have a few Steelers in your Fantasy Football lineup, so much the better; if not, choose a game with an opposing team you have a few players in just to keep things interesting.

Send invites so that they will arrive two weeks before Game Night.

One eye-grabbbing idea is to create a “game ticket”-style invitation. Print it out in yellow and black if possible (look online for freebies). Enter the party information on the ticket, and print on heavy cardstock for a “real feel.”

If you really want to go crazy, throw some yellow and black confetti inside the envelope before mailing.

Get game by decorating the part space – or even yourself. See the ideas listed below.

You know what your guests want – food and beer, and plenty of both! Serve traditional game day foods like chicken wings, ribs, chips, jalapeno poppers, cheese squares/cheese spread, nachos…the list goes on. Choose your favorite game day-style foods and either prepare them yourself or buy them premade. You’re likely to find plenty to pick from at your local grocery store all season long.

That being said, here’s a couple Pittsburgh-style foods to try out:

If you can, get local Pittsburgh beer. Try Iron City beer, Penn, or Rolling Rock. If not, go for any German-inspired beer.

Primanti Bros. is THE place to be for a game, so much so that you’ll find their venues at Heinz Field Stadium. For those of us at home, here’s how to make an imitation sandwich:

Mix these ingredients and put in the fridge.

1. Start with a bottom slice of Italian bread
2. Add capicola, spiced ham, or another of your favorite
OPTIONAL: Fry your ham, and add a fried egg on top for a breakfast sandwich! Add to the bread
3. Pile on the fries!
4. Pile on the slaw!
5. Add a tomato slice and onion (optional)
6. Add the top half of the bread, press down, and cut in half. Enjoy!

Grab your plate, add some ketchup (Heinz is based in Pittsburgh), sit down and enjoy the rivalry…er…the game!