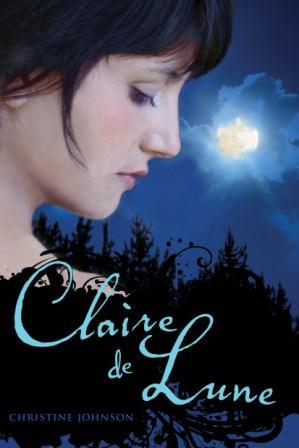 “Even a man who is pure in heart
And says his prayers by night
May become a wolf
When the wolfbane blooms
And the autumn moon is bright.”
From The Wolf Man

Werewolves are in right now, but were they ever really out?  Classic Hollywood werewolf movies abound, from 1941’s The Wolf Man, starring Lon Chaney Jr. and Claude Raines to I was a Teenage Werewolf, with Michael Landon, ca. 1957.  The Twilight series has brought werewolves back into the spotlight, with teen heartthrob Taylor Lautner cast as Jacob Black, a werewolf fighting Robert Pattinson’s “Edward,” (a vampire) for Bella’s (played by Kristen Stewart) affection.

Here’s the question:  is it better to be pursued by werewolves and vampires, or to be a werewolf?  Christine Johnson’s new novel, Claire de Lune

I like to think that each of us has a bit of werewolf in us:  heightened senses when we’re excited, strength to overcome obstacles, and, most importantly, a little bit of “wild” that comes out during a full moon.

I think some of the most fun parties are those which are NOT associated with “BIG HOLIDAYS.”  Get togethers planned purely for having fun (with maybe a minor event excuse,  See: My Annual Kentucky Derby Party) are great, because nobody really has expectations.  What involves less pressure than a full moon? Everyone’s a little bit willing to get a little bit crazy during a full moon.  That’s when everyone’s inner werewolf peeks out a bit.

Howl to Throw a Werewolf Party during the Full Moon

I couldn’t resist the pun.  There have been far too few puns in my posts lately.  But, seriously, here’s how to have serious fun with a full moon werewolf party.

The right tunes are necessary to keep every party going.  Here’s what to play at your full moon party:

Decorating for a full moon party can be tons of fun.  Evening, shiny moonlight, shadows where werewolves might lurk. . . Here are some decoration best bets:

To have the perfect atmosphere, stick with silvery and metallic tones, blues and whites. A moonlight party should have a very “cool” feel to it.  (Stay away from golds, bronzes, and warm tones).

For more fun with Werewolves, and to win a copy of Claire de Lune, a werewolf book with a twist (all of the werewolves are female!), head over to The Garden of Words (my home blog).