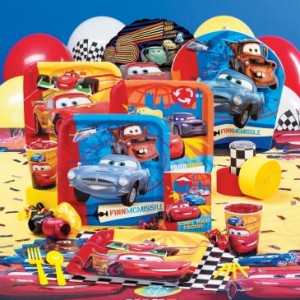 Cars 2 has arrived, the Disney Pixar sequel to the 2006 release. It features old buddies such as Lightning McQueen and Mater, plus some new international associations as the cars race in Japan, Italy and England for the Grand Prix. Big fun! Get it in gear with a Disney Cars Party. Here’s how.

Pick up a cute set of Cars party invitations, or make your own. Try one of these suggestions:

Think black and white checks (racing-flag style) or red, yellow and blue (for the Cars movie theme) for party decorations. Pick up the color scheme with your tablecloth, napkins, cups, plates and plastic forks and spoons.

Hang loads of streamers in these colors as well; they’ll give an awesome effect to the party area. 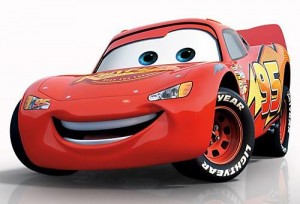 Print out racing flags, or make your own using construction paper for the flags and chop sticks for the holders, then coloring with markers. Cross these and put them up on the walls of the party area.

Cars 2 takes place in England, Italy and Japan, so print out (or make) flags of these countries as well. Hang them up, tape them to the wall or place them in a clear vase filled with confetti as a party table centerpiece.

Don’t forget the awesome banner! Kids love these. Create or buy a banner with your child’s photo announcing that he or she is the party’s guest of honor. 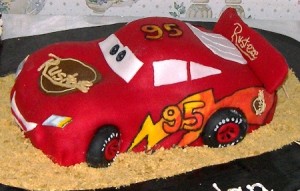 Get things rolling with these party activity ideas: 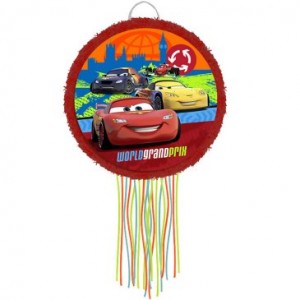 Have a Cars or a Nascar theme pinata. Make sure you leave plenty of space around the pinata so nothing gets broken — and this includes fellow guests! Keep party guests well back, blindfold the first person in line, give him or her a bat, baton or stick and let him have his three swings. Then it’s on to the next guest, and so on until the pinata breaks apart, spilling treats and trinkets.

As an alternative to a pinata, try a Treasure Tower game. These are hugely popular right now and are guaranteed to make party guests happy.

Draw a race track in your driveway with chalk. Have a bike, tricycle or scooter race and award the winner with a Cars 2 theme ribbon. Give all runners-up a small prize, such as a piece of candy.

For preschool age children up to about first grade, play car versions of their favorite games. Try Red Light, Green Light–where guests advance on “green light” but have to stop at “red light”; if a guest takes a step forward thinking the light will be “green” but it’s not, he or she has to stand in place rather than stepping forward. The first to the finish line is the winner. Also try Musical Pit Stop, played like Musical Chairs; choose fun party music or the Cars or Cars II soundtrack.

Have a beanbag or ball toss through a tire. Use an old tire you have around, or if you’re fresh out, make a “tire” out of cardboard but cutting a circle and a hole within the circle and coloring it black with gray or silver treads.

Pass out goody bags at the end of the party. Put them in a cute black and white checkered bag or box or something Cars-themed. How about pencils in this cute pencil case? Add a few pieces of candy, a sticker or two and you’ve got the perfect thank-you for your party.

Remember, life is a highway — ride it all night long!