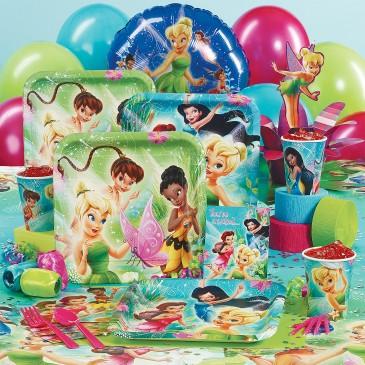 Does your little one believe in fairies? Throw her a Tinkerbell birthday party. The tiny fairy with an (adorable) attitude from the classic book and movie Peter Pan is a popular party idea. Put together a Tinkerbell party theme with Disney inspired decorations, fairy table settings, greens and woodland scenes and even a showing of the movie to top off a great day.

Let’s ask the obvious question: should you invite boys to your child’s Tinker Bell party? We say yes—after all, Peter Pan has always been fascinating to boys and girls alike, and there are many traditionally “male” roles in the book and movie so that guests of either sex can take their pick. Every child can have fun at a party with this theme.

Invite guests (boys and girls alike) to dress as a favorite Peter Pan character. Of course, the party girl will probably want to be Tinkerbell herself; both boys and girls can have fun being pirates or the Lost Boys.

You can arrange a dress-up game during the party for very young children by having costume pieces available: a big black hat and safe “sword” for pirates; a green cap for Peter Pan; and lots of fairy wands and frilly fairy skirts and dresses for the girls. You can buy a series of fairy costumes at the Disney Store, or look at a second-hand shop for fairy Halloween costumes to create your “tickle trunk” that can be enjoyed long after the party!

If You Believe in Fairies, Clap Your Hands

Everyone will believe in fairies (perhaps even you!) when you create decorations, food and games with a little bit of magic.

On the party table, sprinkle “fairy dust” (confetti).  You can get the party guests involved by asking each one to take a palmful of the confetti and sprinkle it on the table as they arrive at the party. Tell them they are helping ensure that the party will be fun and magical!

Hang lots of curly streamers and balloons around the party area to complete the fantasy feel.

The birthday girl will be thrilled with a Tinkerbell cake.  These are easier to decorate than you might think, but if you’re short on time, ask your local bakery whether they can create a Tinkerbell cake for you. At supermarkets, the bakery section will likely have a catalog of cake themes, and I usually always see a Tinkerbell or at least some sort of fairy cake decoration. Fairy themes are highly popular for children’s birthday parties; chances are there’s a baker in your area who can accommodate you.

Serve small-size “fairy” foods on green “leaves” (plain green plates drawn down the middle with black magic marker to imitate the veins of the leaf). A few ideas include cocktail hot dogs in a blanket or by themselves; small pieces of cut-up fruit, especially tropical varieties; miniature finger sandwiches and snack size mini candy bars.

Have a fairy punch available: mix red juice (cherry, strawberry or raspberry) with lemon-lime soda to get a pink colored, flavorful drink.

Fun From Beginning to End

Wrapping up the party but still have some open time? Show the movie! Make sure you have a good copy of the DVD on hand and pop it in for guests to watch while the party winds down.

After the party, be sure your little one observes proper party etiquette by sending thank-you notes. These don’t have to be fancy; a simple “Thank you for coming to my party!” will do. Careful—a fairy birthday party is so much fun, your child will be asking for another one just for fun!