Fretful but loyal and surprisingly brave when the chips are down, C3P0 is one of Star Wars’ most beloved characters. And it’s not just his ultra-cool gold-colored body … it’s the way he adds an element of surprise risk-taking (and sometimes humor) to all the Star Wars releases.

So if your little one is begging for a C3P0 Star Wars birthday party this year, I have to say I’m not surprised … nor am I a stranger to arranging this awesome theme. After the third year in a row that my youngest son requested a Star Wars party and reminded me to include “3P0”, I’ve found a whole host of ways to celebrate this fun character and stellar 30-year-old series.

So let’s get started on your child’s fabulous C3P0 party. Not long from now, in a galaxy right in your living room…

One plus to this party idea is that whether your little Jedi loves the sequel trilogy, the prequels or The Clone Wars

in either cartoon or CGA, C3P0 is in all of them! This means you can mix and match different 3P0s (for instance, his half-finished form from The Phantom Menace and his snazzy gold-plated physique two movies later). 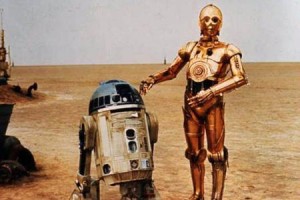 So if you’re unable to find a full set of plates, cups, tablecloths, centerpieces and decorations from one particular Star Wars movie, you’ll still be fine (unless your youngster is VERY particular – be sure to ask ahead of time which movies he likes best, just in case).

But do make the decorations Star Wars themed, and do have 3P0 be the star of the show. Consider buying a cardboard standup of 3P0 and taking pictures of the party guests alongside the famous droid. Your youngster and all her friends will love it.

Eats That Are Out of This World

Of course, it’s all about the cake (and the other goodies), so have some eats that will send the party guests right into orbit.

Hope your little one’s party is out of this world!