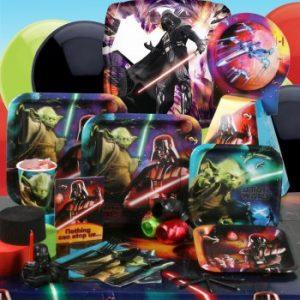 If the Force is strong with your young one, treat him (or her!) to a Star Wars birthday party. The possibilities are out of this world, and his reaction will send you into orbit. Star Wars is the perfect theme for grown-up “kids,” too. Here’s how to get started.

When creating or purchasing Star Wars party invitations, you may want to have one particular set of movies or TV shows in mind. (See our reference guide below, “Who’s Who in the Star Wars Galaxy,” for help—or just ask your own little Jedi.)

THE ALLIANCE NEEDS YOUR HELP!
Strong is the Force in you. On (date) the Death Star will be approaching, and we need your Jedi skills to help (name of the birthday boy or girl) defeat Darth Vader and rescue Princess Leia.

Please park your speeder at: (party location)
On: (date)
The party blasts off at: (time)

We’ll be serving Yoda’s special swamp water and Luke’s galactic snacks to help in your quest.

For an adult, movie-theme party, try:

Coming soon…to a suburb near you!
STAR WARS MOVIE MARATHON
The showing starts at: (time)
There will be plenty to eat, but let us know any food restrictions and we’ll accommodate you. Bring your best costume, your lightsaber…and an appetite for fun!

Decorations definitely make this party theme, and you really can’t overdo it, so have fun! Certain colors go with certain themes (for instance, dark blue, black and silver for The Clone Wars series). Cut out paper stars, planets and photos of Star Wars space craft and hang them from the ceiling. Always include one Death Star in the corner, looming with menace! Of course, you can have the Death Star as a pinata as well! Check out how to make one here.

Hang streamers, have plenty of balloons and consider a wall mural for a real galactic feel. Check out the full range of decorations at Celebrate Express or Amazon.com.

Put centerpieces on the gift and food tables; premade centerpieces are perfect (and easy), as are helium-filled balloons (consider renting or buying a disposable tank to make things easier on the morning of the party).

Your guests will come ready for fun, so give it to them! Here are a few ideas:

Who’s Who in the Star Wars Galaxy

If your child has requested a specific “time period” or character cast for his or her party, choose from among the following:

Check out the Wikipedia article to catch up on your Star Wars knowledge.

Have fun—and may the Force be with you!