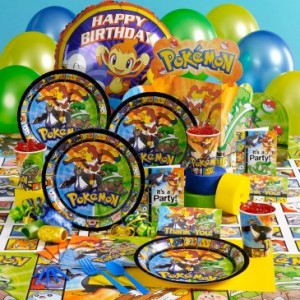 Admit it—you don’t just want to have a Pokemon birthday party for your child; it’s a little bit for you too! Anyone who’s played (and played and played!) any of the incarnations of the Pokemon video game series knows just how fun, fascinating and can’t-put-it-down the game can be. But even if you’re not sure what it’s all about, we can help you, from start to finish.

What is a Pokemon?

The word is a contraction of two words meaning “pocket” and “monster”. Pokemon is both singular and plural (“a Pokemon,” “here are all my Pokemon”). The smash hit Nintendo game was originally based on insect collecting.

Players try for the title of Pokemon Master by collecting all the Pokemon in a certain area. To capture one of these odd, fascinating and somehow cute critters, the player must throw a Poke Ball and hit it.

Once enough Pokemon are collected, the player is dubbed a Pokemon Master and can pit his or her best creatures in battles against other Masters. Pokemon can be played as a card game, a pass time that achieved huge popularity in the late 1990s among school-age children (and kids of a slightly more advanced sort as well).

In the world of Pokemon, some creatures are more popular than others. Try to incorporate some of these into the decorations for your child’s party.

Print Pokemon out from sites on the internet and hang them on the walls. Cut out “weird” paw prints and have them lead to the party (and perhaps crawl up the door for an added fun effect).

You can also have your child draw large-scale Pokemon characters on cardboard or construction paper, and stand them up on the food table or around the area. Even easier: Buy a Pokemon standup that your child can keep in her room after the party as a memento.

Some names to know in the Pokemon world are:

Have a real Pokemon game for guests. They’ll love this! Have cards available so children can pair up and play one another. (The cards make the perfect party favors, too.)

They can also play the video game; this is better with a smaller and somewhat older group of kids, as they’ll need enough maturity to wait their turn.

Place cardboard stand-ups (either purchased or handmade) outdoors and have the guests line up to take turns aiming at them with a “Poke Ball” (any ball).

The winner is the Pokemon Master and is allowed the first serving of birthday cake or receives a small prize.

Check Pokemon.com for more specifics on the game and let your imagination run wild with this fabulous and funky party theme.