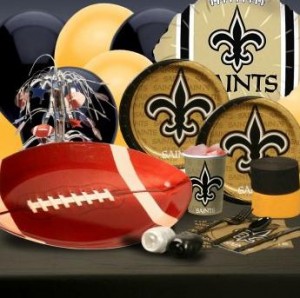 Show your team spirit by hosting a New Orleans Saints Football Party.  Bring touches of this classic city to your home, and a fighting football spirit, too.  For true authenticity, invite some nuns.  (Think we’re kidding?  Some Sisters from New Orleans were prominently featured in the post-game award presentation for the 2010 NFC Championship!)  New Orleans is a city that has undergone unimaginable tragedy and triumph.  When they celebrate, they go ALL OUT.

Black and Gold Bring Down the House

The Saints’ head quarterback, Drew Brees, played successfully for the Purdue Boilermakers before being drafted by the San Diego Chargers.  He must be at home in the black and gold, as he’s made New Orleans his home town, and the Saints his home team.

The Saints play in the newly renovated Superdome, and are always enthusiastically greeted by tens of thousands of fans.  To decorate for your New Orleans Saints football party, grab the essentials: football shaped plates, bowls, and decals.  Add some team flags, and lots of black and gold streamers, ribbons, and mylar balloons.  If you order your own party pack, you can take the balloons to your local grocery store or florist to have them inflate the balloons for you.

If you’re going to cheer for the Saints, you have to learn the cheer:

There’s an entire “Who Dat” nation of Saints Fans.  They start tailgating outside the Superdome EARLY on game days.  You can also tailgate in your own yard, if you’re missing the feel of tossing back a cold one on a cool day outside the stadium.  Here are some foods perfect for a Saints Football party or tailgate party:

It’s Not a Football Party without Beverages

Who Dat Nation loves to make noise, and they love the Saints.  Outfit everyone with appropriate football party attire like temporary Fleur-de-lis tattoos.  It’s the least you can do to support the team, really.  And, lead everyone in some vocal warm-ups prior to the start of the game.  The players can hear you from inside your house, you know?