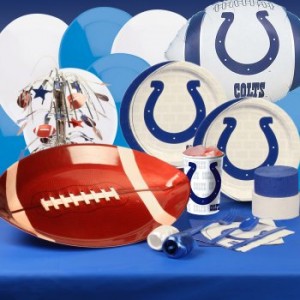 With the Colts going to Super Bowl XLIV, and enjoying a run of success with popular quarterback Peyton Manning, Indianapolis Colts parties will be in full swing for years to come.

Of course, they’re my favorite team, because I grew up in Indianapolis, attending Colts games at the Hoosier Dome (before it was the RCA Dome), and before the Colts were much to talk about.  Another interesting tidbit about those years:  my family’s season tickets were directly across from the press box with the visiting team’s VIPs. That made for some interesting games for a ten year old to observe!  Their recent success is sweet for all of the fans who never lost their fervor for the Colts. GO HORSE!

Bring the Lucas Oil Stadium to your Home

Well, your house probably doesn’t have a retractable roof.  But, you can still make your party as festive as the atmosphere inside the Colts’ new stadium.  Their colors are true royal blue and white.  Their logo is an upright horse shoe.  (For good luck, of course!)  And, their mascot is a horse called “Blue.”  Here’s how to decorate for the most festive atmosphere at your Indianapolis Colts party:

For your Indianapolis Colts party, you are going to want to serve traditional football fan food, AND, some Indianapolis-Area favorites. Bet you didn’t know there even were Indianapolis-area foods.  Don’t host a Colts party without these necessities:

First, make sure everyone has plenty to drink.  Then, go outside and play horseshoes.  Or, if it is cold and snowy, you can probably find a child’s indoor horseshoes set.  (Most likely safer with lots of, er, imbibing, adults.)  You can also play “Pin the Tail on Blue,” the Colts’ mascot.

Any way you plan it, a Colts party is certain to be fun!