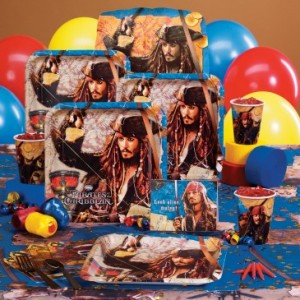 Pirates of the Caribbean party supplies

(Now what did you think we meant?)

Every great party starts with great party decorations. Here are some ideas that should float your boat: 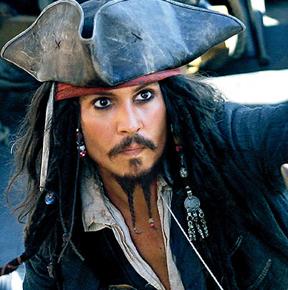 Seafarin’ lingo of days gone by will serve you well as you greet guests, and add awesome flavor to the party invitations, too.

Here’s a great list we found to brush up on your pirate-talk skills. We laughed most heartily (or should I say most me-hardy-ly?) at some of the lesser-known phrases on this site. Here’s a couple:

Hornswaggle – to steal or defraud

Head – the toliet, usually a hole cut into the deck overhanging the bow of the ship

Landlubber – Meaning “slow and stupid”, it’s a pirate who isn’t taking well to the sea life.

Take a Caulk – Take a nap on the deck (since the boards of the deck were caulked with black tar, a pirate would likely have black lines on their clothing)

Grog – Since water in a ship’s hold was often old and spoiled, pirates mixed it with rum to mask the taste (and as an antiseptic.) Yum! The name was originally the nickname of British naval captain Edward Vernon (“Old Grog”) who came up with the idea in 1740. He also added some lemon juice, and though he didn’t know it at the time, he had unintentionally cured scurvy (lack of vitamin C), and his sailors were always healthier than those from other ships. 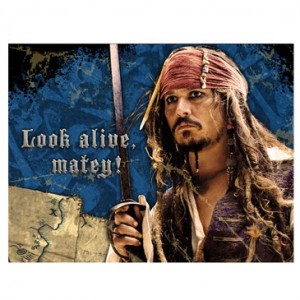 Invitations set the mood and let guests know what’s required of them (for example, if it’s a potluck party, you’ll want your guests to know well ahead of time; ditto for a dress-up party). Try these ideas to make a splash: 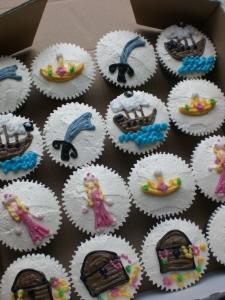 Fun on the Open Seas

Get the party hopping with some real pirate fun. Try these ideas: