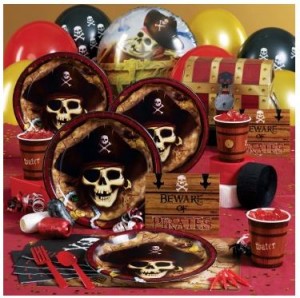 Arrrr, Matey! Plan a Skull and Crossbones Pirate Party for the sea-faring and sword-bearing swashbucklers in your midst.  With the popularity of the Pirates of the Caribbean movies, pirate parties have long been all the rage.  Here’s how to throw a party so fun, you’re guaranteed not to have to walk the plank.

If you elect to go with printed invitations, rather than electronic, here are some fun ideas for pirate party invitations.

Message in a Bottle or Message on a Bone

You can make a message in a bottle by using rinsed out, clear water bottles that are fully dry.  Add some sand, a few small shells, a couple of pennies (Gold coins!), and this message on a slip of paper inside:

To help your party guests get in the mood, include a pirate-speak glossary along with their invitation. (Avast! Did you know there’s an actual “Talk Like a Pirate Day?”)

These pirate party activities are guaranteed fun for everyone. 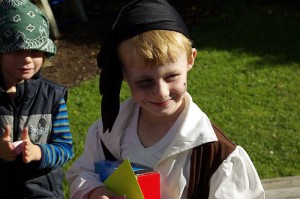 Scavenger hunt (of course): This hunt can take place throughout the house, or neighborhood.  You can hide treasures for everyone to find, or hide clues that lead to a big treasure (like a copy of the Pirates of the Caribbean DVD for all guests).  Another fun way to organize a scavenger hunt is to have participants take pictures of certain items or landmarks around the area.  Because most everyone has a phone with a camera these days, that’s pretty easy to do.

Watch Pirates of the Caribbean Movie: If the pirate party is a sleepover, this movie is a good bet for late entertainment.

Charades: Participants will re-enact pirate scenes and words.  Here are some ideas:

Pegleg Pirate Three-Legged Race: Divide participants into teams of two.  Then, tie the right leg of one to the left leg of the other.  Line everyone up at the starting line.  The teams have to figure out how to “walk” with “three” legs instead of four.

Cannon Ball Toss:  Fill black water balloons.  Then, line people up in pairs across from each other.  After every successful throw, everyone has to take a step back.  The last ones with an un-broken balloon win. 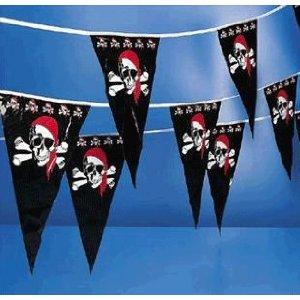 Turn your living room, basement, or spare room into a pirate’s den.  Here are some must-have pirate decorations:

Food That Won’t Give You Scurvy

Pirates need lots of treats to keep their energy up for sword fights and rowing the pirate ship – and oranges to stave away scurvy. Here’s what to serve at your pirate party:

Pirate ship sandwiches – submarine sandwiches with pirate flags sticking out of the top, and pretzel “oars”

Create a treasure chest of goodies for your pirate mateys.  Add these items to your pirate party goody bags:

Hoist the Jolly Roger, and have a wond’arrrrrrrr’ful time at your pirate party!