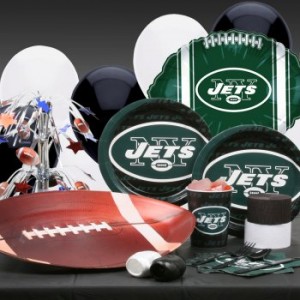 Hey, Jets fans – how about showing some love for Gang Green with a New York Jets party? This hangout is good for any time from pre-season straight through the Super Bowl. Host your own Monday (or any day) Night miracle with these ideas for party supplies, food, decorations, invitations and more.

Make sure your invites match the feel of the party. Print out Jets green and white footballs or ticket-shaped invitations with the party information on either the front or back.

Throw in a fun phrase or two, such as “Game’s on…BYBS [bring your bad selves] to the (your last name) Stadium for fun, good eats and of course…the game!” Or “Get in the game at (your address) on (date).”

If you’ve ever been to a tailgate party, you know what you’ll be serving: everyone’s favorites. If you’re not sure what gametime snacks include, try any of these basics:

We love Food Network and came across this great list of game time eats, so if you’d like to kick the noshing up a notch, try out a few for your Jets party.

Décor For the Jets Fan in You

Two words here: go green. But you knew that. The Jets have had their green-and-white scheme since they became ex-Titans (quick trivia: that event took place in 1964).

Have Jets themed balloons filled with helium or rent/buy a helium tank so you can fill the balloons at your leisure just before the party. Green and black are your best bet for balloons and streamers to really set the mood.

Choose Jets theme plates, cups, napkins, trays and a Jets table cover (or just a dark green one).
Other cool ideas for your table include Krazy Straw football cups, coach whistles to hand out as guests walk in, and game flags for guests to make their own calls during the game.

You can also print out pics of Jets favorites and hang them on the walls with Sticky Tak or another double-sided, removable tape. For these, go classic (i.e. Namath, Gastineau and the New York Sack Exchange posse, etc.), big time names (Favre, Testaverde, Moss, Johnson) or even go true old school with original New York Titans like Bill Mathis and Don Maynard.

Or nab action shots of Mark Sanchez and more of the 2010-11 season lineup.

Before the game starts, or if you’re holding the party on a non-game playing day (yes, this can work too), have football video games set up for fans to go head-to-head. Or pass the Blackberry around with your favorite game.

You can also time your party to accommodate with your Fantasy Football league’s roster to add an element of fun, and a competitive edge.

A child’s New York Jets party can incorporate most of the above. (Skip the beer, of course!) Be sure to add party favors and a game of tag football to keep things going. Foods are similar to an adult’s Jets party, but add hot dogs, pizza or other kid-friendly munchies.

Kids may be more sensitive to competition, so don’t worry too much about holding your Jets party on an actual game day in this case. Just have the theme be green, white and out of sight for a great time for young male and female fans alike.