Spice up your parties with these hot pepper recipes! From gumbo to chili to fresh, home-made salsa, there’s a party recipe for anyone serving something hot for any type of celebration.

First, learn the differences in heat between all of the different pepper varieties. A Scoville unit is used to measure the hotness of a pepper. As a comparison, original Tabasco sauce is around 2500 units. 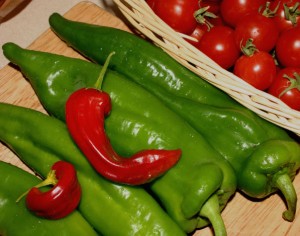 Cut the eggplant into 1 inch cubes and sprinkle with salt. Leave for five minutes, then rinse it in water. The salt will soften the eggplant and draw out the water. Heat oil in skillet and add eggplant cubes, onion, red pepper and garlic. Stir for five minutes. Add paprika and chili powder and cook until it smells good!

Add okra, corn, chicken stock and tomatoes. Stir in the rice, cover and simmer gently for 25 minutes or until the veggies and rice are tender. Add shrimp to mixture and heat through 5 minutes, stirring ocasionally.

This really simple appetizer is good to have on hand if you need to take a dish to a gathering.

Soften one block of cream cheese. Pour one jar of Jalapeno Jelly on top. Serve with crackers or chips.

Texas chili is spicy meat chili without beans or tomatoes.

Add all ingredients to the slow cooker crock and mix well. Cover and cook on low for 8 hours.

Stir chili well before serving, and offer with sour cream and a wedge of lime for a traditional Texas garnish.

Mix all ingredients together and serve with chips. If you ever vacation in the Caribbean or Mexico, make sure to go to a restaurant where the server makes salsa at your table. Nothing is more delicious!

Mix all ingredients together. Keep covered until serving.

Combine cheeses and nuts. Fill the cut jalapeno halves. Chill, lightly covered, an hour or so before serving.

The peppers can be fresh or canned – drain if canned. Substitute for milder cherry peppers if you wish.

Slice the peppers in half lengthwise down one side, not cutting all the way through, and scrape out the seeds.

Stuff each pepper with shredded jack cheese, then stick the halves back together.

Grab a handful of the sausage mixture and wrap it around the pepper, forming it in the shape of an elongated egg.

Dip it in the egg bowl, then roll it in the spice mix and coat it evenly.

Place on a greased baking sheet. When the peppers are all ready, bake at 350F for 25 minutes or until crisp.

Have a delicious and spicy party! For more novice guests, have milk and yogurt ready to kill the burn. Liquid antacids, a pinch of salt in the mouth, and chewing on bread or soda crackers will also do the trick. But nobody will need any of those … right? *grin*