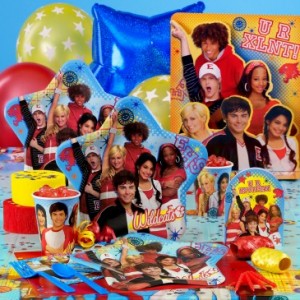 The original story grabbed adolescents and teens with its stellar cast (including Vanessa Hudgens and Zac Efron), Romeo-and-Juliet-esque plot and of course, plenty of music and dancing. It’s really no mystery why the movies are so hot with teens – and even with adults, who are into the High School Musical phenomena too (come on…admit it)!

Ideas For Your Party

Frankly, when I hear the words “tween” and “teen,” I think: Slumber party! Slumber parties are a sort of a “step up” from younger children’s parties, and you can pack them to the brim with fun things to do.

In the original movie, Troy and Gabriella (Efron and Hudgens) met during a karaoke duet. Plan karaoke for the kids at your party. Rent or buy a karaoke machine. Have a space set up on on side of the room, decorated with white Christmas lights. Be sure to get lots of good music for your guests to rock out to. (Look on Amazon

for the soundtrack to each of the movies.)

Give a free dance lesson. Look up dance studios in your area and ask whether this is offered for parties. An hour’s lesson for a group can be pretty inexpensive—ask about specials.

Give guests pom-poms or have them make their own during the party. Have them form two teams (two kids per team is fine if you’re having a small party) and choreograph simple routines. Have them make banners and pendants out of construction paper and markers—East High Wildcats and West High Knights (of course!). Then come up with a lighthearted contest, such as the best dance moves, artistry, etc.

Now that you know what direction your party is going in, it’s time to send out the invitations.

A popular invitation idea for this or other movie-theme parties is to print out a theater-style ticket with “Admit One—to the best party of the year” or “Come audition with us!” and the party information underneath (the address, date and time).

; they’re the height of popularity and can usually be had at a low cost.

For decorations, try setting up the party area to look like a stage. As mentioned above, a string of small lights automatically makes for a stage-like atmosphere; look for cheap Christmas or decorative lights at your local department or hardware store. String them along the wall behind the stage area by using removable stick-up hangers so your walls will be spared.

Balloons and streamers are a great addition to any party. So is a karaoke machine (buy or rent one) and a few High School Musical-themed centerpieces with your child’s favorite HSM characters displayed.

Have fun and get rockin’ with this wild idea!