Here are some fun Easter activities that will keep the kids happy and busy doing something other than loading themselves up with chocolate rabbits, jelly beans and other sugary treats. You’ll also find some tips that will show you how to be the best host “any-bunny” has ever seen.

Pin the Tail on the Bunny

This variation on “Pin the Tail on the Donkey” is an easy and affordable game for kids. Find a large bunny cut-out or make your own using card stock and cutting out the figure of the back of a bunny rabbit. Then give each child a cotton ball that has a piece of double-side sticky tape on it.

If you want, you can either point the blindfolded child toward the rabbit figure or, if they’re older, you can spin them around once or twice and “direct” them by having them move and telling them if they’re “hot” or “cold” as try to find the rabbit character.

A variation is to cut out sets of bunny ears from craft paper and have the blindfolded child try to stick the ears on the bunny. 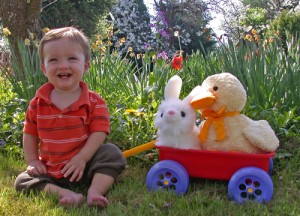 Perfect for most ages; assign each participant a bag of 10-20 single color jelly beans. Put an Easter basket

or goldfish bowl a few feet away (the older the child, the farther away from them it can be).

Put a colored hard boiled egg or a plastic egg on a spoon and, using one hand only, each participant must race to the finish line without dropping their egg. A variation on this game would be to set up an obstacle course where they have to walk around chairs, tables, toys or anything you want to use to create the course.

In a small space or indoors, the obstacle course works best because it doesn’t require as much room as a straight race course might and you can time each child to determine who completed the course without dropping their egg in the fastest time.

Either game would work for children aged six and older but if the children vary greatly in age, you should separate them into age categories (ages 6-8, ages 9-12, ages 13-16, etc.) so that the younger children aren’t expected to compete against the older children for the best time.

Like the “Balance the Egg” game, each child is given a plastic spoon and set along a course. Line four to five children up in a row several feet apart from each other to work as a team. The object of this game is for the first person to take their egg and walk it over to the next person on line and, using one hand only, transfer the egg to the next person’s spoon and so on down the line until the last person takes the egg across the finish line. If anyone on the team drops their egg, the team has to start over with the first person. The team members who complete the task first each wins a prize.

This game will work for all ages and is especially fun when you mix older kids, younger children and adults alike on each team.

Taking a cue from the famous Easter Parade along New York’s Fifth Avenue where ladies show off their best Easter bonnets, gather a variety of sensible and silly craft supplies and plain party hats (or make your own paper hats) and have all of your guests create their own Easter bonnet (yes, include the men and boys too). Then give prizes for “The Funniest,” “The Silliest,” “The Prettiest,” and so forth. Videotape the parade around your home or your neighborhood. It will be sure to bring giggles and grins for years to come.

Try to keep sugary treats to a minimum, especially as game prizes. Instead, depending on the game participant’s age, give Easter-themed stickers, pencils, coloring books, stuffed animals, movie tickets, gift certificates to video game stores and so forth as prizes (or as party favors).

If you’re hosting an adults-only party, you might decide to make a donation to the Easter Seal Society (or your favorite charity) in the name of the game winners rather than giving a prize. You’ll truly show the spirit of the season and will be helping those less fortunate.

rather than hard boiled eggs, especially if you’re hiding them indoors. If you do wish to stay with the traditional hard boiled egg for your Easter egg hunt, keep a list of all of the places that you’ve hid them so that in case an egg or two is not found after the hunt, you can easily check all of your hiding places so that you don’t have to deal with the smell and mess of a rotten egg several days after the party.