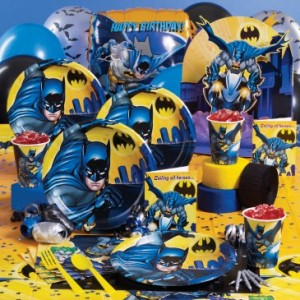 Give your own Caped Crusader one of this year’s most popular parties: a Batman party theme! Arrange your party around one of the Batman movies (like The Dark Knight), the cartoon or even the original 1960s TV hit. Let your little one tell you what he wants and then take it from there. Here’s how.

One hallmark of Batman, from the original comic book down to today’s high-tech crime fighter, is the clever wording. And it’s so easy to come up with something catchy for your child’s party invitations. Here’s a couple examples:

Batman colors include midnight blue, metallic sky blue/silver and black. Make your own invitations by downloading a Batman picture and adding clear-drying glue and glitter, or coloring in with markers.

The décor for this party theme is a blast to put together. You’ll have as much fun creating a Batman atmosphere as your child will have partying in it! Here are some ideas:

Roll up your sleeves and start making the coolest Gotham City your child’s friends have ever seen!

Gather large-size cardboard boxes (you can ask at local establishments if you may take the boxes they are planning on throwing out; most are willing to do this). Cut the boxes along their seams so that they lie flat, tape them all together on the back, then turn the long piece of cardboard over and draw a cityscape. Cut it out and tape it to the wall or prop it up (test the tape on your paint or wallpaper first to make sure it won’t harm your walls!)

String inexpensive lights (white and/or yellow) along your cityscape to recreate the look of a city at night.

Buy an inexpensive spotlight (the battery-operated ones can be as little as $4 on sale at your local hardware store). Insert a yellow bulb, or a bulb contrasting in color to the party room’s color. Dim the party room lights to get an effect from the spotlight, but not so dark that the room will be dangerous to your guests.

Cut out a piece of black construction paper in the shape of the famous Bat Signal and paste it with easily-removable glue, such as rubber cement, directly to the lens of the spotlight. When you shine the spotlight at the wall, the Bat Signal will show up…ultra-cool!

A black light makes a great accompaniment to this scene, creating a spooky “underground” feel. (Note: Be careful; it can be dangerous for children [actually, for anyone] to stare directly into black lights for too long a time. DON’T point the lights directly into the party area where kids’ eyes will constantly be on them.)

Buy small battery-operated spotlights, insert black light bulbs, and situate the lights so they aren’t facing directly into the room but rather, are at an angle. You can purchase inexpensive glow-in-the-dark paint as well; this makes an incredible effect when applied to images you can draw yourself and attach to the walls, imitating the look of the inside of a cave.

If you don’t have a specific movie or show theme (such as The Dark Knight, Batman Begins, Batman Forever etc or the original television series), we suggest mixing it up!

Batman-theme balloons, or balloons in Batman colors, are perfect. For helium, ask at a nearby party store. These will often allow a free fill of helium for at least a few balloons. If not, rent a helium tank to make things easier on yourself the morning of the party.

Gather plates, cups, napkins, forks and spoons that have Batman imagery. For the tablecloth, tape a length of butcher paper along the table and draw a huge Bat Signal emblem in the center.

The Cake and Other Foods

Your local grocery store may have a Batman cake among the themes they offer. Check it out at the bakery section. If not, you can create your own Batman cake by buying small Batman plastic characters and setting them up on a cake frosted in blue and black swirls of icing and sprinkled with silver edible glitter/edible confectionery dust.

Cupcakes also work great—alternate blue with black and stick a small plastic goody on the top of each, such as a Batman character ring. Be sure to tell guests these aren’t edible, especially if they’re younger children.

With a bat-shaped cookie cutter, make various treats. You can use this method to cut out sugar cookies before popping them in the oven, to make bat Jell-O Jigglers or to cut out bread for super bat sandwiches.

Make “Penguin Poppers” by turning a novelty top hat over, lining it with wax paper and pouring in treats (popcorn chicken, chips or candies are all good ideas).

Get ready—you’re going to be the most popular parent on the block. Just be prepared for other parents to grill you for information on how to set up a cool party of their own! (Shh…it’ll be our secret!)