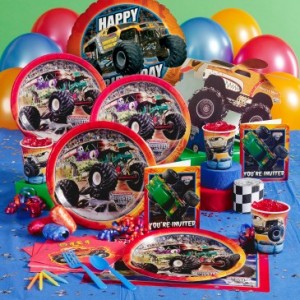 On your mark, get set…party! Monster Jam is a series of knock-down, drag-out truck events held year-round, but with a competitive season that runs from January until the Monster Jam World Finals in March. If your child’s birthday falls within the season, great! If not, hold the party off-season to keep the fun going all year for your child and his or her buddies.

Print out blank “tickets” or simply a folded piece of paper with a picture of your child’s favorite Monster truck on it, and attach one or more of the following sayings along with the party information: 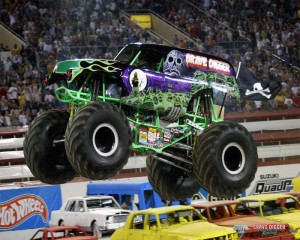 Decorating for the Party

Have the Monster Jam logo hanging above your front door and black-and-white streamers braided (to imitate a checkered racing flag) along your walkway, fence or front railing.

Hang a personalized banner in the party area and add some balloons.

Streamers in racing colors are perfect for any area the kids will be partying in. Match a tablecloth to your theme party decorating scheme or buy one that has Monster Jam images on it.

You can also place removable wall decorations where the children will be playing. At the end of the party, have a “drawing” where each child picks a number. This will correspond to a number you’ve written on the back of one of the clings. The child then takes home that wall decoration as a party favor.

Make sure the food is jammin’ too. Hardcore candies like Pop Rocks, Sour Skittles, Cry Babies Extra Sour Gumballs, Warheads and other “explosive” edibles are great as treat bag take-homes or to serve during the party.

Activities to Get the Party Revved Up

for a great photo opp. Print off the pics during the party and send them home with the guests.

Have a checkered flag relay. Before the party, color checkered flags using magic markers on white paper. Tape the flags to wooden food skewers and create two “race tracks” side by side in your back yard. At the party, pair the children up and have relay races. Time the guests. Each guest “places” and gets a prize.

Another rockin’ idea is to have a tattoo station. Give each child one or two Monster Jam removable tattoos of his or her choice. (Or give these away in treat bags.)

Set up race tracks (such as Hot Wheels, which also licenses Monster Truck toys) indoors. Give each child a monster truck toy to race; these can be gifts for the party favor bags, too.

Play Monster Truck Matchup. Look here for a list of drivers’ bios. List Kids’ favorite trucks include Gravedigger, Batman, Avenger, El Torro Loco, Bounty Hunter, Prowler and Monster Mutt, but there are many others (and there are non-truck Monster Bash vehicles as well). Go down the line calling out a driver’s name plus one hint. As children are “out” for an incorrect answer, they step back. Give the winner a small bag of candy coins.

If your child is the sharing type, give him a Monster Truck video game for his birthday and have all the guests take turns playing. Or if you already have a game or two (or three!) in the house, so much the better. You can find several Monster Jam video games

for all the major video game consoles.

Or play the show, or season highlights, during the party. This idea is ideal for a sleepover party as well: show the Jam before it’s time to sack out, then let the guests stay up an extra half-hour having munchies and good times.