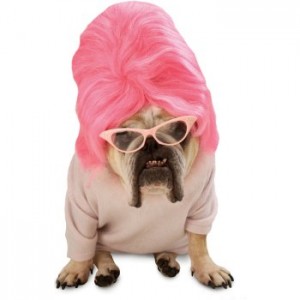 Yup, there’s a celebration for everything! January 14th is National Dress up Your Pet Day! All dogs and cats (and pigs too), RUN! Run for your life! Oh, sure, my 3 year old daughter would LOOOOVE this holiday – she tries to dress her “cousin” Bacardi (a mini pin) all the time – when she’s not trying to ride on him, that is. I dressed my daughter as a dog for her second Halloween, so payback is a … urr, female pup.

I’m trying to figure out who started it, but no such luck. I found a press release from 2003, so it’s been going on for a while. Others say it’s January 15th. Oh well, it’s a fun excuse to dress your pet twice in a year – now, and at Halloween! If you really want to embarrass your dog, my favorite is a jockey dog rider outfit over at Buycostumes.

Since a majority of pet owners view their pets as their children – (I know I would, and we’re planning for a “third” child, probably a dachshund cross when our other children are a bit older) – there’s no reason not to have fun with a costume or two. If you plan on doing so, here’s a couple tips I know from other pet owners:

Oh well, it could be worse for all you pets – you could be featured in I Can Has Cheezburger